Petrina D’Souza, 02 Jan, 2018 04:33 PM
Kamloops-South Thompson MLA and former transportation minister Todd Stone is one among six candidates taking part in the British Columbia Liberal Party leadership election of 2018 that takes place on February 3. He is the youngest candidate running for the party leadership and the only one from outside the Lower Mainland.
Stone is the only candidate who has released a “bold vision” to move British Columbia forward. Through this vision, he wants to make sure all British Columbians, present and future, have the opportunities necessary to thrive and prosper.
In an exclusive interview with DARPAN, he talks about his “bold vision” for BC and his plans to boost the province’s economy on wining the leadership race.
Excerpts from the interview:
Why did you decide to run for the leadership race?
I decided to run for the leadership of the BC Liberal Party because I have three young daughters; they are 13, 11 and eight. So I go through the eyes of my three daughters and want them to have the ability to embrace whatever opportunities they set their mind to as they grow up. I want them to be able to pursue whatever careers they want, I want them to get the best education in Canada and I want jobs available for them when they are done with their education. So that requires a government in Victoria that understands that the decisions today are really about the impact on our children in the future. I watched the NDP government make some very bad decisions which I think will really hurt our children’s future. That’s why I decided to jump off of the sidelines and throw myself into this leadership race to really fight for the opportunities that our kids need to embrace in the years ahead.
What is your vision for the party as the leader of BC Liberal Party?
I’m the only candidate in the race who is offering a “bold vision” that is supported by a detailed plan. We put out 11 different policy initiatives that are all really about doing what we need to do to reinvigorate our economy, keep our economy strong, and make sure that we are investing in the services that people need.

I think one of the lessons for me from the last election is that we talked a lot about jobs and economy, which is very important, but we didn’t talk enough about why jobs and a strong economy really matters. To me, a strong economy matters so that we have the resources to invest in services that people need like child care, a great education system, and affordable housing. I really want to restore some balance to our province and that means to invest in a strong economy and also the people.

What are the key areas you will be focussing on once you win the election?
There are three key areas. The first area is investment in families and people, to ensure that we are investing in supports that families need. So the very first policy we put out was on early childhood developments in childcare. I proposed a $1.2 billion program over four years that will create 75,000 childhood care and early childcare development spaces across the province. A part of that plan also includes training more early childhood educators as well as providing more financial supports for those who really need it or low income individuals in particular to be able to access those spaces. I put out a detailed plan to invest more in services that seniors need. I proposed a number of initiatives to strengthen the educational system for our kids.

The second area focuses on technology. I am a tech CEO and a small business person, and I have a good sense of where the economy is going in terms of technology. We need to do more to prepare British Columbians for the disruptive technologies which are coming at us. So I proposed a number of measures to support the exhilaration of growth in tech companies across BC. I would like to see more technology in our schools so that our kids have tools to help them with their learning.

And the third area is that we want to throw the doors and windows of BC Liberal Party wide open. We need young people in our party, more women and we need more diversity in our party. So I proposed a number of initiatives that I believe would go a long way to inspire more people to get involved with the BC Liberal Party, including candidates, so that when we win in the next election, we have a caucus and a cabinet that is much more reflective of the rich diversity that is British Columbia. 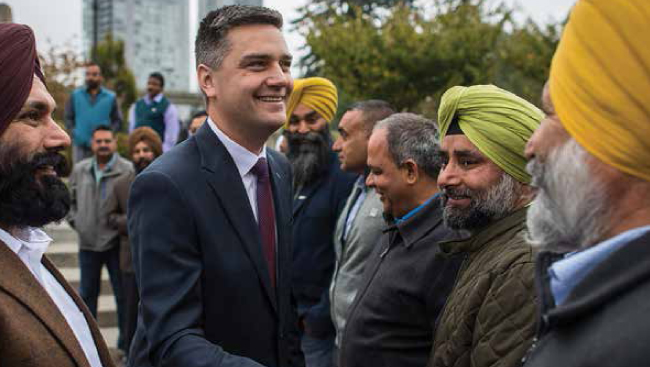 What are your comments on all the recent decisions the NDP government has taken for the province?
The very first decision that the NDP government made was to increase everybody’s taxes. They inherited a $2.7 million surplus, a lot of fiscal room, and the very first thing they decided to do was to take people’s money. They increased personal income taxes and corporate taxes; the carbon tax is no longer revenue-neutral. They have burned through pretty much all of the fiscal room that they inherited from the previous government.

They haven’t yet touched a number of their key campaign commitments. They are spending way too much, way too fast and are taxing people too much and too fast, and it is typical of a NDP government. I was very disappointed with the government’s lack of interest in the Pacific Northwest LNG project in Prince Rupert. This was a $36 billion investment that was proposed. While the decision was made not to proceed, the NDP was excited about the decision. That has sent a chilling message to investors around the world that BC may not be as open for business today as it once was. They are killing projects all over the province that are killing jobs. This is not how we build a bright future for our children and how we ensure our children are able to embrace opportunities in the future. Those are just a few of very poor decisions that the NDP has made in the last four months, and I’m sure the party will continue to break campaign promises in the weeks ahead. And it will be our job to shine a bright light on that.
How do you see the future of BC Liberal party in the coming years?
I’m very excited about the future of the BC Liberal party. We are a coalition of free enterprisers; of people across the political spectrum who believe that taxpayers know how to better spend their money as opposed to government; and of people who celebrate risk-taking, celebrate small businesses, celebrate people who create jobs. I’m very excited about all the young people and diversity that we are seeing coming into our party through this leadership race. This is truly an opportunity to rejuvenate our party moving forward. I think the fact that there are six very good candidates is also a reflection on the vitality and vibrancy of our party. We have a lot of work to do in front of us and I certainly believe that I am the candidate who has the energy, passion and vision to offer British Columbians a new generation of leadership that will inspire thousands to come back to our party, to support us and to help us defeat the NDP in the next election.
Prev Next