Parliamentary Secretary for Sport and Multiculturalism, & MLA for Delta North

My grandfather was involved when he came to Canada. He would often take me along to the events. I always wanted to help other people and felt the time was right for me to try.

2) What new introductions can citizens expect from you as Parliamentary Secretary for Sport and Multiculturalism?

I am really focused on ensuring women stay in sport. Studies show that young women quit sport at high rates between ages of 13-17 and that has health effects later in life. As for multiculturalism, I believe that we need to focus on anti-racism initiatives. There has been a rise in racist sentiment and we must work hard to create an inclusive, tolerant and more equitable society.

3) How will your knowledge and experience in sports add to this new role?

I find that I am able to deal better with pressure because of my sporting background and also comfortable in a team setting. These attributes are critical in politics and in making good decisions that benefit everyone. 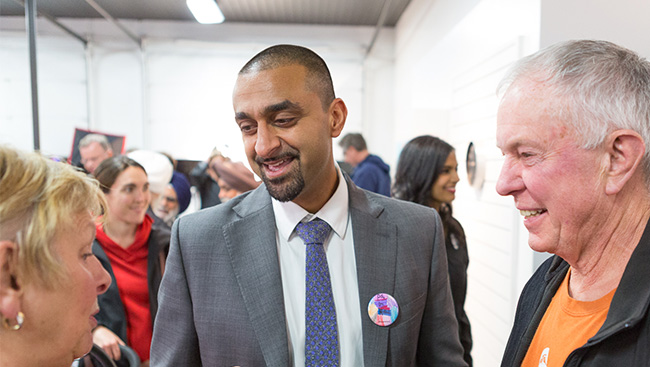 4) Promotion of diversity is a crucial need of the hour, especially with racial attacks taking place worldwide. How do you plan to inculcate the practice of multiculturalism among citizens?

It’s my belief that government has a responsibility to break down silos and promote events that bring communities together. We will be rolling out initiatives in support of this in the coming weeks and months.

5) You are the MLA for Delta North. What is your vision for the region? What are the key issues of Delta North that need attention?

Delta North faces the same issues as our region. We have a housing crises and it’s important that we help calm the market and at the same time bring on social and co-op housing. Numbers of people that can’t afford to even rent in Metro Vancouver is alarming.
Transit and traffic congestion is a critical problem for our region. It’s my belief that we can build a strong transit network and build density around major hubs to address both transit and housing supply issues. We are developing a comprehensive strategy right now.

6) You recently voiced your concerns on a Surrey society receiving a $200,000 government grant less than three weeks after it was incorporated, and are investigating into it. Is there an update on the investigation?

On February 17 a group called New Horizon Society wrote to then minister Rich Coleman. They requested money for an unspecified seniors initiative. On March 1, they registered as a society and two weeks later were awarded $200,000.
The government did not announce this publicly and only heard about this seven months later as rumours in the community that this had happened. This raised serious flags for me and the public, so I started to look into it. People must have faith that public money is spent on public good and I believe that the BC Liberals have some answering to do. 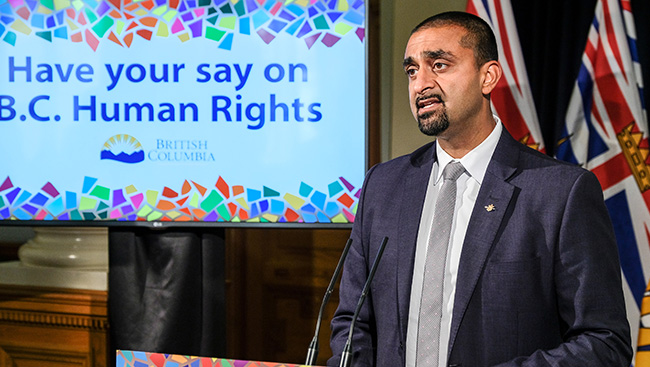 7) You are leading a consultation process on re-establishing a human rights commission. What feedback have you received from people on this introduction through the consultation?

People are excited about the idea that the Human Rights Commission will be a pro active body that will look at discrimination and barriers in our society. Some issues that the commission, for example, will be able to look into are pay equity and new immigrant experience.
Women are being paid less for the work they do compared to men. Also, many new immigrants can’t use their education and life experiences when they come to Canada. The commission will be able to research both and give an independent suggestion to government in order to make progress.

8) The NDP-government has disapproved major projects such as George Massey tunnel, Site C Dam and Kinder Morgan Pipeline that could benefit the economy and provide more jobs. What is your take on it?

The BC Liberals decided to approve Site C without having the Independent Utilities Commission review the project. We have asked the independent body to review the plan and they have reported back that the projection that the BC Liberals told the public was wrong. The independent body just announced the project budget will be 20-50% higher than what was originally told to the public.
We have a difficult decision ahead but we are optimistic about our economy. Premier John Horgan just announced that Amazon will be opening 1,000 new tech jobs in Metro Vancouver and also $6 billion dollar investment in Kitimat by Rio Tinto into their smelter. BC is open for business and we are looking at diversifying our economy.

9) Green Leader Andrew Weaver has criticized the NDP for giving taxpayer-paid jobs to party workers and loyal supporters. What is your comment on it?

All governments hire political staff to support the ministers but the bureaucrats are still the same people who were there when the previous government was in power. We believe that the non political side of government should remain neutral.

10) Being a minority government, is the NDP prepared for a re-election should it happen in the future? What will the party do differently?

We have a four year agreement with the Green Party and I believe they will honour that deal. We must continue to work hard on improving the services people depend on, create good paying jobs and make life more affordable and I feel good that we will increase our seats in BC.
Prev Next

Born and raised in West Bengal, India, Chef Singh was introduced to a wide variety of cuisines only after he had completed hotel school and had enrolled in an intense chef course in India.