When Jaguar first revealed the F-TYPE Convertible, jaws collectively dropped around the world, with enthusiasts and journalists alike stunned at the beauty and performance of the vehicle. It was hard to imagine that anything could top it, and then something did: the F-TYPE Coupe.

Not to take away from the ‘vert, but the lines on the hardtop, a vision of Jaguar’s Director of Design, are just too pretty not to gush over.

“Creating a sports coupe is the purest of design tasks, and also the most challenging; get it right and aesthetically the result will be as dynamic as the car should be rewarding to drive. In the F-TYPE Coupe, I believe we’ve got it right,” said Callum in a statement. And right he was.

Much like its open-air sibling, the Coupe features three “heart lines,” represented by design cues like the shark gill openings flanking the front grille, the sharp fender arches and the distinctive sloping curvature of the roof. You’ll notice that there are no B-pillars present — structural integrity is maintained by a high-strength aluminum beam that runs from front to back, matching the rest of the vehicle’s all-aluminum platform.

The unique construction allows for more interior space than you would think a two-seater sports car could afford. Being nearly six feet tall, I was surprisingly comfortable sitting in the premium-leather-upholstered performance seats that offered just the right amount of support without giving that feeling like you’re stuck in a straight jacket.

If you’ve sat in other Jags before, you’ll be familiar with the adjustable mood lighting (I’m partial to turquoise), motorized air vents and the Meridian audio system. I loved the music produced by the speakers when I reviewed the roadster last year, but the Coupe I tested for whatever reason had what sounded like a loose interior panel that would rattle annoyingly each time any bass came out of the subwoofer.

On the topic of shortcomings, one thing I have to mention is the nearly complete lack of outward visibility while you’re in the driver’s seat. Reversing into a tight parkade spot with a rain-covered backup camera was scary, to say the least. I did get a better special awareness of the car after a few more days of driving it, but it definitely takes some getting used to. One of the unfortunate side effects of owning a great-looking sports coupe, I suppose.

Now, let’s talk performance. The F-TYPE Coupe is offered in three flavours: the standard model with 340 horsepower; the S, which I drove, with 380 hp; and the R with a monstrous 550 horsepower manufactured from a V8. 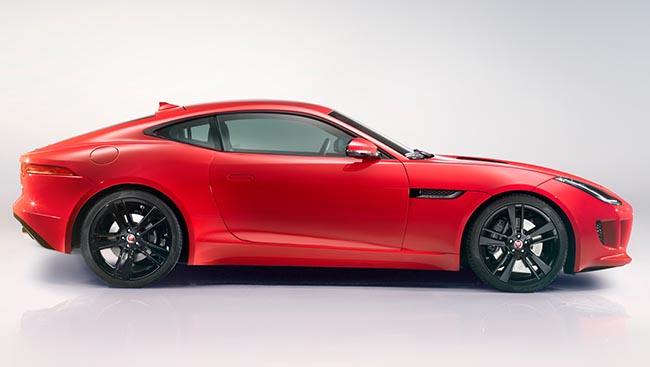 The S features a supercharged V6 and will get you from zero to 100 km/h in about 3.8 seconds. My press vehicle was equipped with the ZF eight-speed QuickShift transmission with paddle shifters — not the six-speed manual option, unfortunately — but the gearbox does a great job of always selecting the right gear for the job.

You can also hear it doing said job exceptionally well when you press the little button on the centre console with a cute muffler tip illustration on it. That opens up some electronically controlled bypass valves to reduce back pressure and enhance sound quality. Translation: it gets LOUD and sounds good.

Driving dynamics can be changed by selecting various modes like normal, race and rain/snow — I stayed on the latter setting mostly due to the sub-zero conditions I experienced during the week. Working with the Dynamic Stability Control system, wheel spin and torque are controlled carefully to maximize the rear-powered wheels’ available grip. For example, even if you give slightly too much throttle while driving over a patch of ice, the car may waver a bit before quickly regaining its composure once the computer kicks in.

The new Lincoln MKC is a compact luxury crossover SUV that looks terrific with its new interior design, styling treatment, and a couple of engine choices.unit in the car.