The Mazda Miata or as it is referred to by the company “MX-5” has to be one of my all-time favourite cars. If you love to drive a great handling car this is the one to have, and it is a car I have craved for a number of years. This year’s Miata is the last in this series as we are due for a new model later this year. Over the years the MX-5 has stayed true to its roots as it is still compact, easy to get in and out of, simple mechanically and not too expensive.

The car I was given to test was the middle of the line GS model that features the retractable hard top roof. I have to admit that when the hard-top model came out I was not that impressed. But, once I got used to it and realized it really never affected the small trunk or space in general, I didn’t mind it. Now, for you purists, the MX-5 can still be purchased with a soft top on the base GX model.

Under the hood you will find a 4-cylinder 2L Double Overhead Cam engine which is a derivative of the original 1.6L engine introduced in 1990 in the original Miata. Coupled to this is a smooth shifting 6-speed transmission. It is this combination that makes this car so enjoyable to whip in and out of traffic and cruise winding roads. The engine pulls smoothly with its 167Hp. and with only 140lb.ft. of torque the MX-5 is no rocket off the line. By working the gears well, you can have fun and speed without taxing the engine as it is made to be worked.

The front suspension is made up of double wishbones and in the rear is an independent sprung unit holding the rear drive wheels. Adding to this are front and rear sway bars for level cornering. The way the engine is placed in the middle of the car makes for very well balanced handling as well. My test car’s tires were the only disappointment as they tended to slip around corners a little more than I wanted, but this is something that is an easy fix with better gripping tires. Overall, I really loved the way the car handled in all types of roads.

True to its simple design origins, the MX-5 has a nicely laid out interior with everything well placed, catering to the driver. All the gauges are right in front of the driver where they should be so they can be seen at a glance while driving. The shifter falls perfectly in your right hand, making shifting a treat. For those taller drivers, the second generation car has increased leg room making the car much more appealing than they were in the past. For me, seating is always very important, and the MX-5 does not disappoint. The cloth seats in our GS model were very comfortable and grip the driver well. 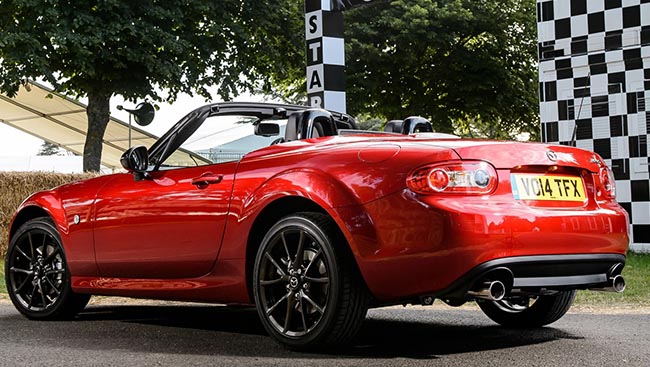 The early cars were well praised for their easy to use convertible roofs. These early tops could be raised with one arm and locked into position in seconds. Today’s retractable roof goes up with the touch of a button in 12 seconds, making the car weather-tight as well as more aerodynamic. When the roof is stowed in the down position, it fits under a hard tonneau cover. One thing I do have to mention from experience, a hard roof does extend your driving season as it is more resilient to nasty weather plus it has a back glass window that even has an electric defogger.

My time with the Miata or MX-5 as it is now officially called was much too short. It has been 24 years since the car has been out and I love it as much as I did the first one I drove and it is probably about time I get my car life in order and buy one myself. At about $30,000 dollars for a new MX-5, they are a lot cheaper than many convertibles on the market and as far as I am concerned, just about as much fun.