When BMW first decided to create M versions of their utility vehicles, I admit I rolled my eyes a little. What’s the point, I thought? I’d rather take an M-powered car over a bloated “Sports Activity Vehicle” (what is an SAV, anyways?) any day of the week.

And then I drove one.

I borrowed the 2016 BMW X5 M for a week and let’s just say it managed to sway my opinion on the SAV some. First, let’s talk about how it looks. With its gaping air intakes in the front bumper, classic twin-stalk side mirrors and quad exhaust pipes, there’s no mistaking this for a regular X5. Just the muscular side profile - which doesn’t have the X6’s goofy turtle-like shape - should be a dead giveaway considering the massive brake calipers and Air Breather cut outs behind the front wheels, helping smooth out incoming air to decrease drag and make the crossover cut through wind resistance easier.

Like any BMW Motorsport-badged car, the interior is a mixture of sports-inspired details, ranging from aluminum pedals to aggressively bolstered front seats, and luxurious appointments such as the bright red leather coverings, suede headliner and loads of tech. As far as automatics go, the pseudo-gated shifter was fun to operate: notch it up and to the left to engage reverse, and push it right for drive. You may notice there’s no park setting - instead, leave the car in D, foot on the brake, and press the engine start button when you’re ready to end the trip. 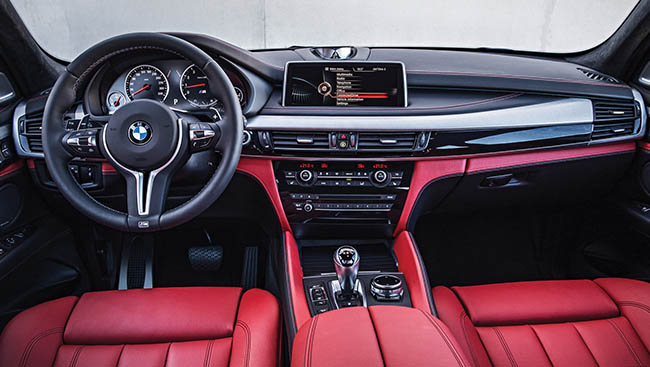 The Head-Up Display gets an M-twist as well. In addition to the standard display options, you can enable a giant virtual tachometer to appear on the windshield just above the steering column, complete with gear indicator and shift lights. It’s probably not something you’ll be using on a regular basis, but a cool feature nonetheless.

The new TwinPower Turbo V8, found in both the X5 M and X6 M, is the most powerful engine ever mated to one of the automaker’s all-wheel drive offerings.  Horsepower has increased to 567 from 555 and torque to 553 lb-ft from 500, increases of three and 10 percent, respectively. To say the X5 M is fast is truly an understatement. Not to sound cliché, but the vehicle literally pulls like a freight train when you apply any significant amount of throttle. An eight-speed M Steptronic transmission is standard, and the gear changes are so smooth and imperceptible as the speedometer needle rises that you don’t even notice it’s shifting at all.

The X5 M is definitely in exclusive company, and that includes the price tag with a base MSRP of $1,05,900. Drivers will likely also be coughing up the dough for gas, as I averaged 19.0 L/100 km in fuel consumption, although my driving style during the week could hardly be described as conservative. Bear in mind, though, that of the several larger profile vehicles I have piloted over the years, this is one of the few I felt handled and behaved like a proper sports car. I think I’ve finally figured out what Sports Activity Vehicle actually means. 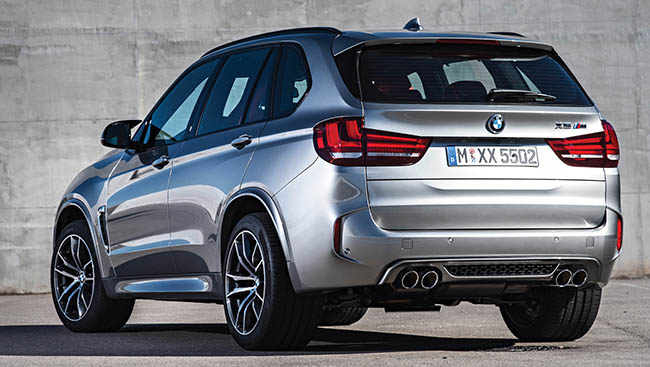 The third-generation Honda Pilot has transformed from a boxy mid-size Crossover Utility Vehicle (CUV)into a mature, lighter, sleeker crossover that’s not afraid to get a little dirty.

Many would probably just say sport utility vehicle, as the two have almost become synonymous since the debut model hit the road over 20 years ago. It has re-invented itself several times during five generations, and the latest development is the creation of the top-of-the-line Platinum edition.