Before breaking out into broadcasting, Meghji graduated from Simon Fraser University with a degree in Finance. From there he went on to work in radio interning at places like MTV Canada, Much Music, and was even a summer sticker spotter for Z.95 FM.

It was through radio he built his skills as a broadcaster and found his passion for storytelling. Since then, Meghji moved on to work at CTV News and Sun TV before finally finding a more permanent home at Breakfast Television with his co-host Jody Vance. Through years of hard work and finding his footing in the industry, Meghji has become a skilled broadcaster in Canadian television and is renowned for his charm and ability to navigate conversations with ease.

“I’ve always been a fan of the visual medium. Radio creates intimacy and can get much deeper with an interview, but with TV there are so many different elements involved that change those dynamics. I think I always thought I liked being in front of an audience from a more visual format.

Radio was never the final destination for me,” he shares. Meghji is a very visual storyteller. You can see by his interviews and the way he presents himself on television that he loves to perform.

He explains that this passion for performance has been present ever since his days in high school and university. In high school, he would emcee events and act in theatre, but it wasn’t until later, he realized that perhaps this passion could actually shape his career.

“I did get the sense in the last couple of years in university there was something very fulfilling from the presentation aspect of the content. Whether it was presenting a business plan or facilitating at a conference, there were creative juices that were flowing.”

In fact, it was at one of these conferences Meghji was facilitating that he had a conversation that changed his entire perspective. At a conference in Quebec, one of the co-chairs sat in on some of his sessions and saw Meghji engage with the audience. Afterwards he sat down with Meghji and talked to him about his career.

“He really challenged me on the merits of following the traditional path of becoming an investment broker. To me that was the path: go to university, do the Canadian securities course, get your degree, go be an investment broker and make your money. But in that conversation he said to me, ‘go into the entertainment world or broadcasting and try something different.’ He really laid it down and challenged me. His observation led to a transformation. It led me to believe that maybe it could happen,” says Meghji, who accredits this very conversation to being the turning point in his career. It is because of this moment we have Riaz Meghji waking us up each morning and giving us our daily dose of news. 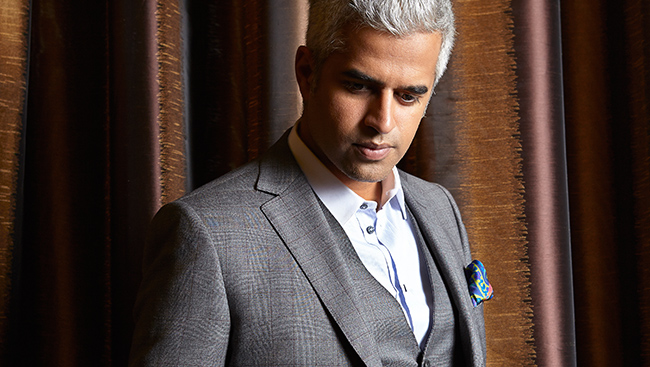 Meghji was so inspired by this he took it one step further. Recently he launched the web series, Every Conversation Counts where he asks famous figures which conversation in their life changed the trajectory of their career. So far he has interviewed people like Rick Hansen and Trevor Linden, all who have amazing stories about a moment of realization that changed the entire game for them.

“It’s interesting when you ask the question to allow people to reflect about a moment, because everyone has got a story. These people have the same challenges that we go through and it’s interesting to see how they overcome these challenges. Everyone has a conversation in their lives,” says Meghji. “I look forward to each and everyone because you hear something different and

I hope people can connect with it. That’s the reward, that’s why this was created: to help people.”

At the end of the day that’s what Riaz aspires to do. He focuses on the idea, the message he wants to share with people. For anybody aspiring to be a broadcaster or journalist he has some simple advice: “What do you want to do? What is the message you want to share? You have to take an angle on the subject in front of you. It’s about clarifying what platform represents you and how you can use that platform to engage an audience.”

Meghji speaks like a broadcasting sensei, probably because he is. With his background and ability to influence the number of people he can with merely his words, it’s no surprise that people love to listen to him.

“I hope people will remember me as the guy that reminded them that a conversation can change a great deal. I hope people continue to see the value of a conservation and go out there and step out of their comfort zone and have conversations that will challenge their own personal barriers.”

This brother-sister duo from Terrace, BC has teamed up to compete on the second season of ‘The Amazing Race Canada.’

Drafted by the Toronto Argonauts, this young UBC athlete has a promising pro-football career ahead of him.