Lindsay Ford, Darpan, 15 Mar, 2014 02:28 AM
A trailblazer, Dr. Kumi Naidoo in his role as Executive Director of Greenpeace International is leading the organization to critical campaign victories and augmenting its influence in international political negotiations. The outspoken Naidoo has been responsible for promoting considerable growth and activity by Greenpeace in the global south. Moreover, he has been influential in fostering further cooperation between Greenpeace and diverse parts of civil society in the fight to avert catastrophic climate change and promote environmental justice.
Born in South Africa into a family whose ancestors were originally from India, Naidoo became involved in the country’s liberation struggle at the age of 15 and as a result of his anti-apartheid activities, he was expelled from high school. He was very involved in neighbourhood organization, youth work in his community and mass mobilizations against the apartheid regime. In 1986, Naidoo was arrested, charged with violating the state of emergency regulations and was forced underground for almost a year before fleeing to exile in England. During this time, he was a Rhodes Scholar at Oxford where he later earned a doctorate in political sociology.
After Nelson Mandela’s release in 1990, Naidoo returned to South Africa to work on the legalization of the African National Congress.  During the democratic elections in 1994 he directed the training of all electoral staff in the country and was one of the official spokespersons of the Independent Electoral Commission.
Naidoo was the founding executive director of the South African National NGO Coalition (SANGOCO), an umbrella body for the South African NGO community.  Moved by the fact that South Africa has one of the highest rates of violence against women, he also served as convener of the National Men’s March against Violence on Women and Children in 1997. 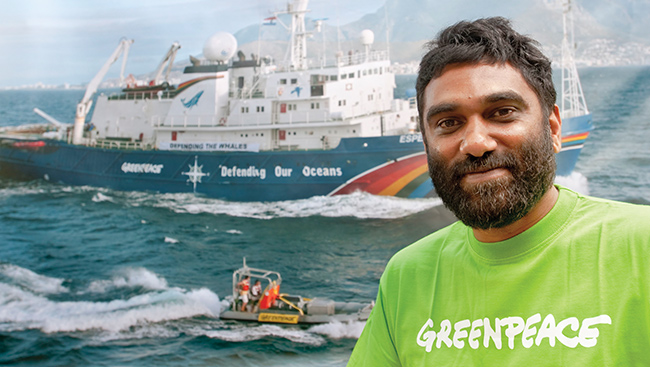 From 1998 to 2008, Naidoo served as the Secretary General of CIVICUS: World Alliance for Citizen Participation, which is dedicated to strengthening citizen action and  civil society throughout the world.
Naidoo also chaired the Partnership for Transparency Fund that supports civil society efforts to fight corruption globally. He
played a key role in proposing and supporting the creation of the civil society index, which is today a recognized tool to measure the health and impact of civil society. In 2010, Naidoo wrote Boiling Point: Can Citizen Action Save the World, which gestured towards the possibility of the Arab Spring and the Occupy Movement.
In 2003, he was appointed by the former Secretary General of the United Nations to the Eminent Persons Panel on UN Civil Society Relations. He was also invited by the UN Secretary General recently to serve on the MEN ENGAGE Board, which seeks to get men involved around issues of gender equality and he served as President of the civil society alliance ‘Global Campaign for Climate Action’ (GCCA) from 2009 to 2012, of which Greenpeace is a founding member.  Kumi Naidoo became Executive Director of Greenpeace International on November 15, 2009.
Naidoo has also served as a board member of the Association for Women’s Rights in Development (AWID), the world’s largest gender justice network. In 2012 he was appointed to the UN Women’s Global Civil Society Advisory Group.
Please tell us about some interesting facts about you?
I grew up in apartheid South Africa and used to think that environmental activism is the privilege of the rich. In the mid 90’s, I started to realize that environmental issues cut across all other issues. For me, climate change is not only about the environment – climate change is an issue of survival, economy and equity. Because of that growing consciousness I started to volunteer for various environmental organizations. In my experience in the international development sector, I saw how development projects that sought to address poverty and succeeded were rolled back because of environmental degradation and climate impacts. I understood that the struggle to end environmental and climate injustice and the struggle to end social and economic injustice are two sides of the same coin. We have to ensure a balance between ecology, economy and equity.
Can you describe your role in activism over the course of your life?
I was inspired by Nelson Mandela and many other activists that I met in apartheid South Africa. I was 15-years-old when I first heard of Mandela. His whole public persona and personal history, even his face, were censored in the public domain. During the apartheid regime, I participated in my first protest opposing inequality in education, fighting apartheid education.
The struggle to eradicate climate, gender and social injustice takes a lot of effort and time. As Mandela put it: the struggle for justice is a marathon, not a sprint. We all found inspiration and motivation in Mandela, who was a model for all of us. Mandela also said that the struggle for justice is not a popularity contest and that injustice will carry on until decent men and women say enough is enough and no more, we are prepared to go to prison, we are prepared to put our lives on the line if necessary. Even today, his words and actions remain an inspiration to young people everywhere. What I hope I am bringing to the amazing and dedicated people I work with at Greenpeace and across the movement is uncompromising perseverance.
Why did you want to get involved with Greenpeace International?
Greenpeace seemed like a logical place to make a contribution and there were two things about the organization that really spoke to me. Greenpeace is an organization that relies on millions of people around the world, who contribute modest sums of money and help raise resources for our campaigns. We don’t take money from corporations or governments – and this gives us the independence to speak truth to power.
Secondly Greenpeace is drawing key lessons from history about how social change happens: those who profit from the status quo will not give up power unless there is a visible mobilization – look at the current situation with our activists, who protested against Arctic drilling and have been accused of hooliganism and piracy. Greenpeace is committed to non-violent direct action and civil disobedience – we can only move forward in winning big struggles for justice when decent men and women stand up and say enough is enough and no more. Greenpeace is a life-loving organization; nevertheless it does have that spirit of being prepared to take action.
Photo: Kumi Naidoo, Greenpeace International
Prev Next

Smiles is currently the CEO of Harcourts Victoria, the state division of one of Australia’s leading and well respected real estate brands. As CEO, she focuses on the growth and productivity of Harcourts’ franchisees and their sales consultants.

In 2003, he set a record for his age group in the Toronto Waterfront Marathon – 5 hours, 40 minutes. Same year, he finished the London Marathon in 6 hours and 2 minutes. In 2004, he was featured in an Adidas advertising campaign alongside David Beckham and Muhammad Ali. He holds eight ‘world age group records’ in one day. An exclusive chat with the inspiring Mr. Fauja Singh.